How to create a custom command handler for your Discord.JS bot. 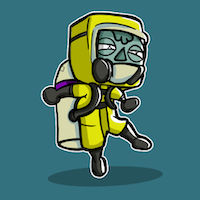 Subscribe to my newsletter and never miss my upcoming articles

All of the code mentioned here is at this GitHub repo:

To follow this tutorial you must have a basic understanding of:

If you haven't done so already, you will need to create a bot. If you don't know how, you can do this by:

Getting the bot online

Before we start creating the command handler we need to write some code to build on top of.

Before that though, we need to get our project ready. Create the following file tree:

Now run npm init or yarn init depending on which one you like to use. (Make sure you set your main file to src/bot.js!). Then run npm install discord.js or yarn add discord.js.

Confused? See all of the code at the GitHub repository i made for this post.

Now we need to write some code. Open up src/bot.js and write the following

This creates the bot.

Before we continue you will need to populate config.json.

Make sure to replace YOUR TOKEN HERE with the token you grabbed from Discord earlier.

Go back to src/bot.js and add const config = require('../config.json') to the start of the file. Then at the end add

This is the most basic bot. Now we will move on to creating the command handler

The best way to do this is to map all of your commands into a Map and then if a message starts with the prefix and there is a command in that map that has the same name as the command matched, run it.

It is good practice to separate this into multiple files.

First we need to map all of the commands on startup.

Add the following code to src/bot.js

What this does is loop through all the files in src/commands and if they have the file extension .js then add that command to the map. You will understand why this works later.

Earlier you should have created the file src/commands/ping.js. Open it.

In this file, write

What this does is tell the command register that it's name is ping and when a user runs it, figure out the ping.

At this point if you start the bot (via node . on the command line) it will log to the console that it has registered a command called ping but you will not be able to run it on Discord.

Go back to src/bot.js and write this code:

I have added comments to explain the more complicated lines. After those the bot just checks if that command exists and it has a runner then runs it if that is true.

If you followed the tutorial correctly the bot should start and you should see the following in the console;

Now if you go to the server you invited the bot to and run !ping this should happen:

If it doesnt, make sure your code matches the github repository (minus the .idea directory my IDE made that automatically)

Thank you for reading!

Image by Morgan Richardson on Unsplash